Rathayatra (‘ratha yatra’) has several meanings. The literal translation from Sanskrit is ‘cart festival’. But of course there is much more to it.

“Just try to understand Jagannātha. Jagat means the moving world, gacchati iti jagat. The Sanskrit word gacchati means that which is moving—all these planets, the universe, the sun—everything is moving, and we are moving. Jagat-nātha, nātha means master and proprietor. Therefore, Jagannātha means the proprietor or the master of all these movements. And Balabhadra, Balarāma—bala means strength and rāma means enjoyment. Balarāma means He who gives you spiritual strength for enjoying eternal blissful life. Subhadrā—su means auspicious and bhadra means well-being. Subhadrā, Jagannātha and Balarāma combined together are present here to reclaim you all from your miserable condition of life. That is the purport of this Ratha-yātrā festival. If anyone sees Jagannātha, Subhadrā and Baladeva on the cart, then he does not take birth again in this material world. Ratheja vamanaṁ dṛṣṭa.”  (7/5/70 San Fransisco Rathayatra)

Krishna Consciousness and another spiritual meaning of Rathayatra.

So if we want to have eternal life, full of knowledge and blissfulness, then we must take to Kṛṣṇa consciousness. Our, this Kṛṣṇa consciousness movement is the greatest welfare activities in the human society. We are giving information to every man, without any discrimination of cast, creed, or color, that every human being especially, not only human being, all living entities, including the animals, beasts, birds, trees, aquatics—everyone—they can achieve to the highest perfection of life by this Kṛṣṇa consciousness. But especially the extra intelligence of the human being can be utilized to realize Kṛṣṇa. If we don’t do that, we are missing a great opportunity. So our request to everyone is to understand this philosophy of Kṛṣṇa consciousness. I have already explained what is this Ratha-yatra festival. It is in commemoration of a grand visit by Lord Kṛṣṇa along with His elder brother, Balarāma, and His younger sister, Subhadrā, in a solar eclipse ceremony at Kurukṣetra. This occasion is the subject matter of this Ratha-yatra festival. Apart from these historical references in the matter of Ratha-yatra festival, there is another spiritual meaning, that the Lord is situated in everyone’s heart, and this body is just like ratha, or car. He is sitting in everyone’s heart. It is stated in the Bhagavad-gītā, sarvasya cāhaṁ hṛdi sanniviṣṭaḥ: “I am sitting in everyone’s heart.” Mattaḥ smṛtir jñānam apohanaṁ ca. ([Bg. 15.15] (27/6/71 San Francisco Rathayatra)

The Esoteric Meaning of Ratha Yatra

In a purport of Sri Caitanya-caritamrta, His Divine Grace Srila Prabhupada gives a wonderful illumination about the esoteric meaning of Lord Jagannatha’s Ratha-yātrā.

After giving up the company of the Vraja-gopis, Vrajendranandana performed His pastimes in Dvaraka. When Sri Kṛṣṇa visited Kurukshetra during a solar eclipse, He was accompanied by Baladeva, Subhadra, and other Dvarakavasis. At Kurukshetra, Kṛṣṇa again met the Vrajavasis, especially Srimati Rādhikā and His beloved sakhis.

Sri Caitanya Mahaprabhu is Sri Kṛṣṇa Himself assuming the part of Sri Rādhā in order to understand Kṛṣṇa. Lord Jagannatha is Kṛṣṇa and Sri Caitanya is Rādhā. Lord Gauranga’s leading Jagannatha Swami toward the Gundica Temple corresponded to Srimati Rādhikā’s leading Kṛṣṇa toward Vrndavana from Kuruksetra.
Sri Ksetra, Jagannatha Puri, was taken as the kingdom of Dvaraka, the place where Sri Kṛṣṇa enjoys supreme opulence. However, Kṛṣṇa was being led by Mahaprabhu to Vrndavana (represented by Gundica Temple), the simple village where all Vrajavasis are filled with ecstatic love for Kṛṣṇa. Sri Ksetra, Jagannatha Puri, is a place of richly opulent pastimes (aisvarya-lila) just as Vrndavana is the place of intimate conjugal pastimes (madhurya-lila). 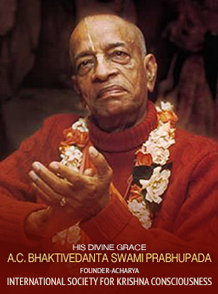